I resigned from my position as a First Reader at Strange Horizons. I held the position from mid-September 2012 to the end of July 2013, so that’s about eight-and-a-half months (SH was closed to submissions in December and January.)

the other kind of slush

I’m a bit sad it’s over. Slushing was a good experience, and I learned a great deal.

Writing instructors will often say slushing will benefit your writing. They’ll say it’s good for you. But I have to admit that when I applied I was a little vague about exactly what that benefit would be.

Here are a few things I learned from my first reader experience.

First, I learned that all of the standard advice about writing good fiction that gets repeated in every writing class and how-to-write book is actually true. I knew it on an intellectual level. Now I believe it, on a gut level.

Second, a form rejection letter/email means exactly what it says. The magazine has decided not to publish my story. That’s it. Really. As a First Reader, I sent form rejections most of the time. A thoughtful personal comment for a rejection letter takes time to write. Time that could be spent reading the next story in the FR queue, or writing, or reading that neglected novel.

Third, a personal rejection doesn’t necessarily mean my story is “close” or my submissions are getting better. As a first reader I occasionally added a personal comment to the rejection email because I thought I had something useful or helpful to say about the story. But even then, I only wrote that comment if time allowed.

Fourth, I think I’ve gotten better at giving feedback to members of my critique groups, at least when it comes to identifying story problem areas. Whether or not I’m better at identifying problems in my own writing, or figuring out how to fix them, remains to be seen ;-)

Lastly, I learned the secret to getting your story past the slush reader, and into the hands of an editor. The secret? Write a fantastic story. So simple in theory, but of course difficult in practice. As a first reader, it was the best feeling ever to read a story that I could pass on to the editors with a note that said I loved it. That made my day.

And now that I’m retired from slushing, I’m looking forward to spending more time writing, and making a dent in the piles of books that have accumulated around my house (at a faster rate) since I started slushing. 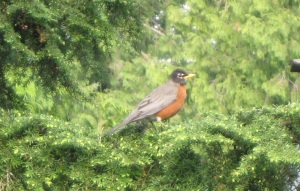 A robin in the tree outside my house.

Last weekend I attended Foolscap, a small, local Fantasy and Science Fiction convention. One of several cool things about Foolscap is the Friday Writer’s Workshop. I got to attend four presentations, all of them extremely useful and informative.

The Villains workshop was particularly eye-opening for me. It was taught by the amazing Kat Richardson, author of The Greywalker Novels. She recently wrote an essay, “A Wretched Hive of Scum and Villainy” about how important a Villain is to a story. Kat is not only a gifted writer, but also an excellent teacher.I had several actual “ah-ha” moments during Kat’s workshop. In particular, I have two short stories I’ve been working on that were sort of “stalled” because I knew something was wrong, but I didn’t know what. Now I know – they need a “better” villain! The villain defines the conflict. If the story is kind of ho-hum and uninteresting, it’s probably because the conflict is too vague or undefined. What does it need? A villain. A villain that’s as deep and fleshed-out as the hero.

I shouldn’t have been surprised. A couple weeks ago I was in the process of creating my new character for a GURPS-based role playing game. My husband and I joined a group that is just starting a new campaign. So I was paging through the “GURPS Basic Set: Characters” book, reading about possible Advantages and Skills for my character. I mostly skimmed through the positive traits I could “buy” with points. The Disadvantages (faults) and their consequences were far more interesting. (I chose “Weirdness Magnet”, -15 points.) 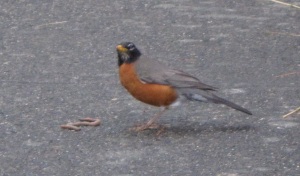 A robin and his breakfast.

Speaking of villainy, I am now a First Reader at Strange Horizons!  I am very excited about this opportunity. It’ll take a lot of time and work, but I feel so honored to get this awesome learning experience!

No, I will not be blogging about reading from the “slush pile”. For anyone that is interested in an “inside perspective” from the point of view of experienced First Readers, I  recommend Sarah Olson’s blog post (from a few months back) “Slush Readers’ Advice for Writers”.