Change and a Haircut

Change is inevitable, I think we all know that. A lot of change we don’t have any control over. I’ll reframe from making a list because that would be endless. But some change is completely within my control. Like the length of my hair.

Miriah before the haircut.

I’ve had long hair for most of my life. When I was little my mother kept it short, because she understandably didn’t want to deal with the effort involved. So when I was a kid, I always wanted long hair, and that desire stuck with me ever since.

Most people don’t change that much in their lifetimes, in my opinion. We can learn that there are more choices. We may even learn to control our behavior and make different, better choices. But, who we are usually stays pretty much the same.

I grew a little bored of my hair. I had to keep it braided most of the time otherwise it was in the way. Now, this short hair feels weird, like I’m missing an old friend. But hair grows back, right? 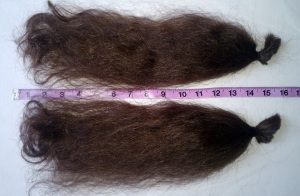 A few people have asked if I donated my hair to Locks of Love. That is a wonderful charity. When the twins were babies I donated my “pregnancy hair” to LoL. But Locks of Love doesn’t use hair that is gray or colored (they sell it) and nowadays my hair includes a bit of both. This time I donated to another charity my hair stylist told me about, Pantene Beautiful Lengths, that provides wigs to women cancer patients. Because not everybody gets to choose the length of their hair.

Reunions, Writing, and Growing Up

This week the twins and I have been visiting my mother in my home town, and tonight I will be participating in a time-honored American tradition. I’ll be attending my high school reunion.

In terms of writing, it’s been a productive week. I did some major editing on one short story, and made progress on the first draft of another. I also wrote a guest blog post, and once it goes online I’ll link to it here.

For my own blog I added a Twitter feed, Blogroll, and “Resources for Writers” table. (I am embarrassed to admit how long it took me to figure out how to use the WordPress Links Widget. So I won’t.)

There is something surreal about a high school reunion. In many ways it’s difficult to figure out why I want to attend. High school was one of the low points of my life. I was painfully shy, had few close friends, and low self-esteem. I didn’t attend my senior prom, mainly because no one asked me. Academically, I was/am smart, but I only did well in the subjects that interested me. In retrospect I was a downright average, angsty and self-centered teen. So after thirty-five years, why on earth would I want to relive any of that?

For me, the reunion’s biggest draw is the potential to reconnect face-to-face with people I truly regret losing touch with.

Unlike in films or in some books, one moment in time does not define who someone is now. People evolve. Anyone who really wants to can redefine themselves as many times as they need to during their lifetime. I’m looking forward to getting to know some of my ex-classmates again, to finding out where they are now, and to appreciating how they’ve grown.

One thing I’ve learned from writing is that every life experience has the potential to become story fodder. As a speculative fiction story setting, a high school reunion is practically cliché. (BTW, if a time-traveling version of myself wants to carpool in a DeLorean, come on by. Just sayin’.)

No doubt I will be uncomfortably reminded of the person I was when I was eighteen. She had a few more flaws I’m not going to advertise here. The odd thing is, I still feel like the same person, even though I’ve changed. I wouldn’t be surprised if she shows up as a character in one of my stories. So there’s one advantage to being reminded of her. Tonight I’ll get to observe how time has affected a few dozen other people. Some of them may appear in a story or two down the road.