Some of the notes I took in the panel:
• a fight scene must advance the plot – something must change
• get into your POV character’s head
• the action is about how the POV character reacts, not who hits who with what
• ground the narrative in sensory information – smells, sounds etc.
• the POV character should be hurt in a fight, something should go wrong
• establish the emotional stakes before the fight – the reader should care about the fight outcome
• in a life/death situation, people react automatically according to their training (or lack of training)
• setting is important, including bystanders – props can become weapons
• pay attention to how fights usually go in movies and take it in a surprising direction

But first, I had to figure out what happens during the fight in my story. There are several people in the scene, and even though I’m only going to write what the POV character is aware of, I need to know what else is going on. Because, while she is busy with one enemy, the other characters aren’t just standing around!

So I threw together a few props and took pictures. Here are a few of them: 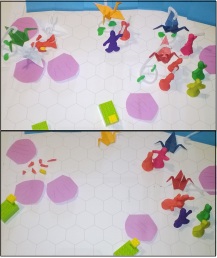 The POV character is blue. A couple of red shirts turn on shields that attract flying predators. One red shirt drops and gets shredded while my hero and the others fight off the rest.

It was fun setting this up. Hopefully the writing result will be easy to follow.

One response to “Choreographing a fight scene”