I can’t believe it’s already the end of September. My eldest daughter got married one month ago, and my twins have been back in school for three weeks.

Writing the second draft of my novel (which I’m calling the first draft since I’m calling the novel-like pile of words I completed my zero draft) is going much slower than I expected. I think this is because when I wrote that initial draft I did more “discovery” writing than I thought – the story crystalized as I wrote it.

It took me two-and-a-half weeks to write/rewrite the first 5000 words in which I introduce two of the three POV characters, their goal, the world, and foreshadow the third main character.

I got stuck when I started writing/rewriting the next chapter of the novel in which I introduce the third POV character, his goal, another part of the world, and the main villain. I realized I had no idea how this third hero would interact with the villain initially, before he is aware of their conflict. In my first/zero draft I worked out the what/why/how for the villain later, but not so much in the beginning.

My solution: Summarize the novel from the villain’s point of view.

That brought so much of the story into focus for me. It also clarified the motivations for another character… the one who betrays my main characters.

I mentioned in my “Still here and blogging” post that I finished the zero draft of my novel on 5 June 2016. Let me just pause to relish that statement…

Woo-hoo! I finished the zero draft of my novel!

All the best writing advice says that it’s a good idea to let that zero draft cool off until the writer can muster enough objectivity for the next step which is editing the novel. (Cooled off. Check.)

The next step is to edit that roughly novel-shaped pile of words to the best of my ability. (The following step is recruiting beta readers and other writers for feedback/critique. Then more editing.)

But, where do I start? I had a hard time wrapping my head around the entire 115k words of novel draft. It’s tough to hold the whole slippery thing in my mind all at once. Do I start editing at the beginning? Do I jump around in the middle, using the notes I made to fix the sudden shifts in plot and character motivation and loads of other stuff? I haven’t really seen any writing advice about the nuts and bolts of digging in to a messy zero draft and turning it into a coherent first draft.

So, this is the approach I came up with for editing my zero draft:

First, I read through the zero draft and summarized everything as it is. Including that chapter I knew would have to be thrown out and rewritten the moment I finished it. Mistakes and all, even the first chapter that doesn’t work anymore now that I know exactly how the novel ends. My summary consists of about one sentence per section, so there’s a paragraph for each chapter.

My next step is to write a chapter-by-chapter summary for the novel’s next draft. This will serve as a detailed outline when I begin re-writing and give me a tool for holding the entire novel in my brain at the same time. So far, I’m up to chapter 4 of 18. I hope that the two outlines will serve as a map from where I am to where I want to go.

How do you handle the first revision of your zero-draft?

Another distraction to add to the list of reasons I hadn’t updated my blog (to continue from my last blog post) was my volunteer work with Slighe nan Gaidheal and the every-other-year Fèis event (a five-day festival) in June.

I have been Slighe’s volunteer treasurer for almost six years. My second, three-year term on the Board of Directors ends on October 31st. And then I will retire.

The Scottish Gaelic language, or Gàidhlig (sounds like GAL-ik) as it’s called in that language, fascinates me. I feel that understanding the gaelic languages gives me a window into the Celtic mind and heart.

Gàidhlig was very nearly wiped out, in the systematic way that languages spoken by the poor and powerless often are (*). But in recent years the language is experiencing a resurgence. That is due to several factors including UK government support and the willingness of many families to enroll their children in the new Gàidhlig emersion schools. Also, all over the world there are individuals and groups learning to speak Scottish Gaelic. For the last twenty years, Slighe nan Gaidheal has nurtured a persistent community of Gàidhlig learners and speakers in the Pacific Northwest.

So after my husband and I began taking classes in Scottish Gaelic through Slighe’s excellent education program more than seven years ago, I wanted to give back to this little community. So I enthusiastically volunteered to help with the 2010 Fèis. Then I ran for and was elected to the Board of Directors.

The treasurer position is not difficult, insofar as anyone who can balance their checkbook and learn to use QuickBooks could do it. The critical requirement is consistency – checks have to be deposited and bills have to be paid on time. Slighe is a small non-profit with no employees, so there are not that many transactions to keep track of. Except during a Fèis – then it gets insanely busy and sorting out the financial end of things can easily take up every spare minute for several weeks.

My enjoyment in working with this volunteer organization has been strongly influenced by the dedication and attitude of the other volunteers. When all the volunteers show up for meetings and do their jobs to the best of their abilities when they say they will do them, it can be a wonderful and energizing experience.

I feel that the best reason to volunteer my time to an organization is because I love what the organization does or stands for. For almost six years I have accomplished an ongoing task that is critical to the continued existence of Slighe nan Gaidheal, so I feel good about that. Slighe has many responsible and devoted volunteers whom I have enjoyed working with over the years.

It’s time for me to retire from the Slighe board. Three months left to go.

(*) The majority of Scottish Gaelic speakers are, now and historically, white. In my opinion that is the main reason it survived compared to, for example, Native American languages.

Reasons I have not updated my blog in four months:

3. My husband and I took our twins on a family vacation in northern India for three weeks.

4. The illness I picked up in India came home with me and has been hanging around for one-and-a-half weeks (so far).

5. My oldest daughter is getting married four weeks from now.

Today I passed 75,000 words on the initial draft of my novel. Based on my outline, I think I’m on target to reach “The End” at around 100k words in the middle of May.

Writing a novel is hard. And yes, that’s not a surprise to me. But, still… even when I love the setting and characters, writing about them in the same story day after day… it’s hard.

I’ve been sticking to my plan of not taking any breaks to write sneaky distracting short stories. I admit that I’m toying with the possibility of taking a small break to edit a previously written short story that is set in the world of my novel – so I can submit to an open call. 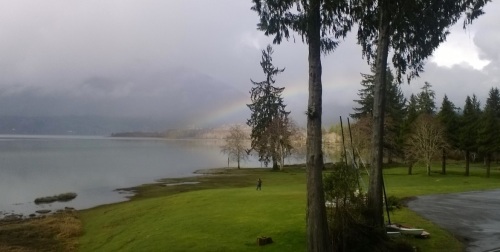 In February I got to go to the Rainforest Writer’s retreat, and boost my progress.

I’ll be participating in Camp NaNoWriMo during the month of April, and I’m hoping that will help me keep up my slow but steady pace.

If you are a novel-writer, what was it like to write the first draft of your first novel?

Today I reached 50,000 words on my novel. Based on my outline, I’m a little past the half-way point.

I’m still learning what works for me. Here are some of the main things:

Set, and reset, an achievable goal.

I floundered a bit in December, but recommitted to my goal of 500 words per day on average. At this rate I will finish the novel first draft sometime around the end of May. Some days I write more and some I don’t write at all, but that’s okay because I’m in it to finish.

I use an Excel spreadsheet to track my daily word-count. I set it up to display what day I will finish the novel, based on my current total word count and daily goal. I find that I feel really motivated to keep up my progress when I see my projected completion date change. And if I have one… or two… or even three days without writing (because life happens) my writing log motivates me sit down and get back to it.

Guard against things I know will derail me.

The temptation to “take a break” from writing the novel to “just write one short story” is very enticing to me. But I know that the sweet and sparkly lure of writing distraction that a short story offers is pure kryptonite for me. So lately when I get an idea for a short story, I write it down and save it. I don’t get to revisit that idea until the novel draft is finished.

Almost as tempting, but equally derailing, is the urge to go back to the beginning of my novel and rewrite it. I’ve made notes, and I don’t get to do that until the first draft is complete and I start editing.

I’ve found that short-story/novel-chapter critique groups can be detrimental to my novel-writing process. I am constantly resisting that inner voice telling me if I’m a serious writer, I should be producing at least one critique-ready short story or novel chapter a month. So I’m wary of engaging with a group that echoes that voice. Luckily, my critique group is very supportive. 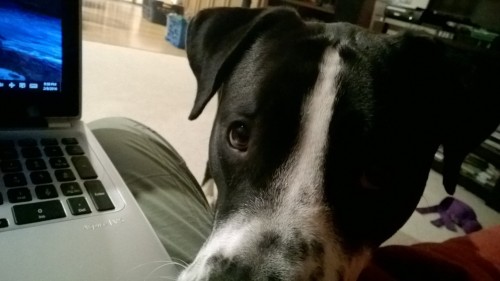 Teddy explains that there is no plot problem that cannot be helped by going for a walk.

NaNoWriMo 2015 is over. I ended with a word count of 25,400. So I failed to win NaNoWriMo. But, I’ve got the beginning of a novel so overall that’s a personal win for me.

Once it was clear that I was not going to “win” NaNoWriMo, it was really hard to keep going. To hit the 50,000 word winning target, you have to write 1667 words per day on average. In November my daily word count varied drastically, including seven days when I did not get to write at all. This is how it actually broke down:

Moving forward, I’m setting a goal of 500 words per day (average) progress on finishing this novel. I should finish before Camp NaNoWriMo in April.

How did NaNoWriMo go for you?

viewpoints
Create a free website or blog at WordPress.com.